Ok, from now on I am going to make sure that I make at least one post a week, this is mainly due to not having as much time as I first thought I had. For this post I thought I would talk a bit about my favourite player, Mihail Tal, if you search for his name in databases it comes up as Mihail Tal, while the internet has Mikhail Tal. I have no idea why this is, if anyone who knows for certain which is correct please let me know.

Mihail Tal was a genius, probably the most aggressive player of all time, he was not afraid to sacrifice material to get to his opponents king. After his amazing career which included becoming world champion from 1960 to 1961, he was asked a simple question, “Were the sacrifices you made during your career sound?” Tal’s answer was one to remember, “I don’t know, but they looked like fun.” OK so if he doesn’t know if they were sound then why did he play them? The first thing to remember is that Tal was playing before the time of computers, and he really liked to have the initiative, even at the cost of material, this meant he could use his tactical genius to create problem after problem for his opponents. Many of whom could not work out what was going on and would lose spectacularly.

If you were to put the moves of one of his games into an engine it would often say that Tal was losing badly, however that is only if the player would find the best defence, not an easy thing to do over the board. The game below is one of my favourites of Tal’s, he played this game while he was fairly young, I recommend you play through this game with the help of a computer keeping in mind that both players were strong grandmasters. The computers evaluation swings back and forth with pieces hanging everywhere, and tactics all over the place. Just imagine trying to defend this position against Tal with only a certain amount of time to fork out all the complications, it’s no wonder Tal was so successful.

On top of the difficulties on the board, Tal’s opponents had to deal with his intimidating and unnerving stare. Here is a picture of Tal performing his stare. 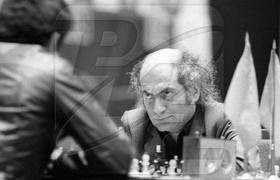 How on earth can you concentrate with that face looking at you? The intimidation factor clearly played a factor throughout his career as many of his opponents would be so scared that they wouldn’t play their normal game and would actually play worse than they could. There have been many examples where Tal would make a totally unsound sacrifice and his opponent would fail to defend even when there were some fairly obvious moves to allow them to win. It’s almost like a 2600 player when having to defend against Tal would play like a 2200 player!

Not taking anything away from Tal, he was a true chess player who made some great moves, he would not have become world champion by just intimidating his opponents. I have included a few more of Tal’s games for you to look at, with some of my personal favourites, sacrifices, big attacks and unclear positions. Take the computers evaluation with a grain of salt when analysing these games and keep in mind how difficult it would be to defend against the great attacking prowess of Mihail Tal.

For those who know me, you would know that my playing style mimics Tal’s and I often sacrifice material to complicate the position, as there are many gambits in my repertoire. Here’s a secret about me that I probably shouldn’t tell you. I will very often sacrifice the exchange to create an imbalance in material, even if it’s losing, as I, like Tal, like complicated positions with different pieces on the board. For example, if both players have knights then I find it boring, where as if there are bishops vs knights then the imbalance helps me to complicate the game. Now don’t try to use this knowledge to counter my playing style, as people tried to do to Tal, because it will probably fail badly.

No dought I am not the only person who plays like this, my advice when playing people that are that aggressive, is to brush up on your tactics and be prepared to defend, and whatever you do, don’t try to hold on to all the material given to you. Many tried to directly counter Tal's style of play, and pretty much everyone failed.
Here are some of Tal's games.